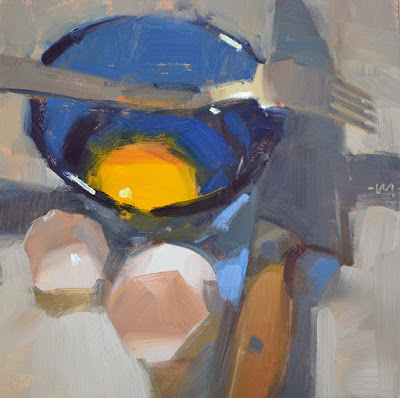 creating in a vacuum vs. borrowing

There’s an artist I’ve followed for many years whose work I love. He has some unusual techniques/results that are similar to what I’ve been after lately. I’ve been searching around online for any instruction or process videos, to no avail. So I mustered up some courage and emailed him to ask if he would ever consider creating something like that, and that I was sure many people, including me, would pay to see it.

He wrote me back right away, and said he understood this kind of thing was popular right now, but that he didn’t believe “in those things having any good for the art world in general.” He said he didn’t feel like he could contribute to something so “inherently wrong.”

He said, “If I can suggest anything which will definitely open up your mind and your process, it would be to lock yourself away in a cabin with art supplies, empty notebooks, and as many tools as you can gather, without any internet or outside influence beyond that of the voices of trusted family and friends ( aside from their input on art ) and just let yourself go for months at a time.. It’s more difficult to find trust in one’s own values, than it is to paint a masterpiece.”

In the weeks since, I have done a lot of thinking about this. My first (very emotional) reaction was defensiveness, because I myself wrote a book, teach workshops, and continue to put out online tutorials. Is what I’ve been doing all this time wrong? I am not convinced.

Then I thought of a (great!) book I read a few years ago, “Steal Like an Artist,” which basically says the exact opposite of what this guys suggests - that nothing is original and we should steal any and every idea we come across.

On the other hand, one thing I’ve realized about having gotten a (pardon me) sh*tty art education from my university, is that I was forced to teach myself. And in doing so, I came up with my own unique process. Yes, part of that came from looking at other people’s work and trying to figure out how they did it, but I was essentially alone in my studio, for years, toiling away, experimenting with one thing after another, finding my way. Would I be in the same place today if I’d had good instruction from one person from the beginning? Or would I be a version of them? OR, would I have borrowed little things from lots of people/places and recombined them into my own thing? Or did I do that anyway?

I haven’t come to any conclusions, but I do believe that every artist finds their own balance, naturally. I tend to look for inspiration when my own well runs dry. And I look for instruction when I’ve been trying something new and am frustrated with it, hoping to get a “been there, done that” perspective from someone else. But there are lots of extended periods where I’ve got tons of ideas popping into my head, and the things I try ARE working.

I’m not going to share the artist’s name who emailed me back, because he’s not a bad guy, just someone with a strong opinion. But I wanted to share this story because it gave ME a lot to think about, and I would love to hear how it gets your gears moving!
Posted by Carol Marine at 4:29 PM