Christmas on the Creek 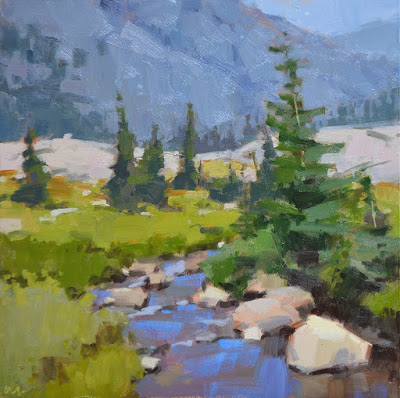 On this day (in the Sierras) I started out painting with two of my buddies across the lake from camp. After a crappy little waterfall painting and a seriously mediocre attempt at a grand scene (with way too much in it for an 8x10!) I decided to hike back alone for an afternoon nap. On the way I noticed a little used "trail" heading up between two rocky areas, and decided to scope it out. After a while the trail petered out so I continued on, exploring, and found a whole "upper" meadow with streams and waterfalls and great views. Well, apparently there was another, easier trail from another direction, and 2 others from my group were already there! So we painted there the rest of the day and the next day as well.

I painted this particular scene from the bottom of a waterfall, looking downstream. Some big clouds were rolling in, and I decided I liked the scene best when the back, background was in cloud shadow. The reality though was that the shadows changed constantly, (which is my least favorite time to plein air paint) and to be quite honest I'm not sure you can tell that it's supposed to be sunny in the foreground. But ... I quite like it anyway, and I hope it works regardless.
Posted by Carol Marine at 3:54 PM