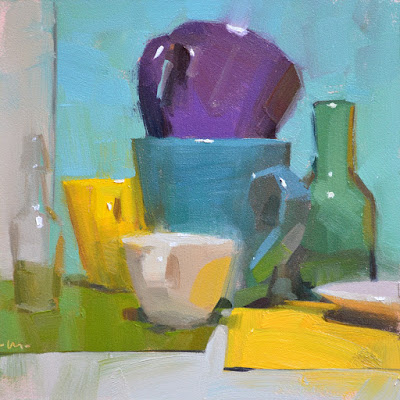 If you had a stack of cylinders, it would look something like that in figure a. (yes, my examples are sloppy, but you get the idea) If you start from an ellipse in my drawing that is below eye level and go down, the next ellipse is more rounded than the first, correct? And so it makes sense that when you are drawing a cup, the bottom ellipse will be more rounded than the top one, as in figure b. But most of my students, even when they are looking at a cup from above, draw the cup with a flat bottom, as in figure c. Why? Because their brain and what it knows is over-riding what they are seeing. They know the cup is (technically) flat on the bottom but forget it won't look that way when viewed from above. So I tell them, curve the bottom, and they draw figure d. But now the curve is similar to the curve in the top ellipse, right? And it should be a little bit more rounded. This is a subtle thing, but important I think in making your cups believable.
Posted by Carol Marine at 8:05 PM

Good thoughts for learning and reminders for us “old” timers. Thank you for sharing your expertise with us.

Thank you for an important lesson! I've known so many good artists, even great artists, who have trouble with ellipses, not seeing them or rendering them accurately. Once understood they're not that hard, but it's understanding them that's tricky. They look weird at first till you're used to it because the mind does know those are parallel sides on a cylinder.