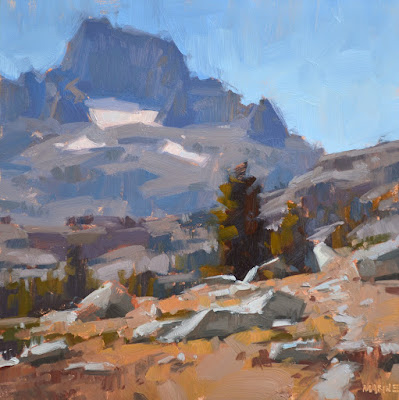 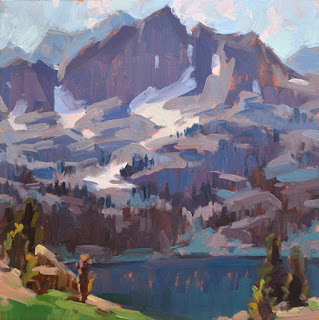 I finally made myself do something that I've been telling myself to do for years! I copied a painting I like by a famous artist in order to learn stuff. This one up above is not it. It's this one to the right. The original is by Edgar Payne, and it was much bigger, so mine is a simplified version.

In attempting to copy this painting, I found mainly that I had to use a different brush than my normal flats/brights to get it to work, which was a huge revelation. I ended up using a round brush (Rosemary Evergreen, size 6), which I found very fun and satisfying!

So I took my round brush and did the painting up top, from one of my own reference photos that I took last summer in a spot incredibly close to Edgar Payne's scene. You can see there is less snow now. And, truth be told, I actually made up extra snow.

The lake in the copy is Ediza, and I'll be painting there this August for a week with my pals! But what I really wanted to say is - copy paintings you like (don't sell the copies)! You'll learn a TON.
Posted by Carol Marine at 10:40 PM

Very nice, What paint program are you using?
Paintbrush etc. Thanks

I talk the talk but don't walk the walk on this one too.
You approached it exactly as I would, using your own photo to bring authenticity to the painting.
I actually like yours better and I LOVE Edgar Payne!
Rock on !! ❤️