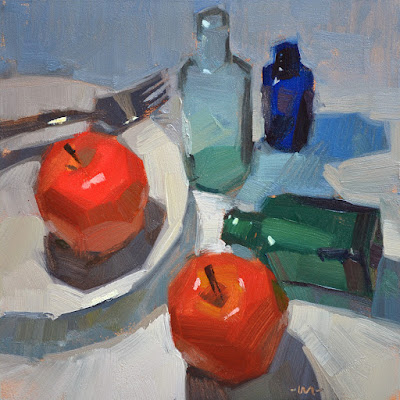 I finally had a chance to try out one of the new products I got at the plein air convention. It is a solvent made of lavender oil, from Chelsea Classical Studio. Granted, I only tried it for one day, but here are my thoughts:

It cleans brushes very well. And if you're really sensitive to OMS, it is definitely worth a try. But it's crazy expensive ($45 for 32 oz - much more than the Gamsol I use). And it smells VERY strongly of lavender. Don't get me wrong - I love the smell of lavender. But this is pretty overwhelming (full disclosure - I am sensitive to strong smells). I also felt that it dried faster than Gamsol, which threw me off some. I'm sure I could get used to it, if I was motivated enough. For me personally, it's not worth the price. But then, I'm not sensitive to OMS. My 2 cents.
Posted by Carol Marine at 9:48 PM

Sweet painting Carol, love that little colbalt blue bottle. Thanks for the info about that solvent. I switched to Cobra water mixable oils last year to get away from the solvent and I'm pretty happy with them.

I don't use oil of spike lavender to clean brushes, no, I use art wipes, oil, and then soap for that. I use it (or oil of rosemary) in mediums, for imprimatura, undersketching, and in glazes. I need less of it than I would of OMS, and it works very well. And it's safe for my very young, very inquisitive pets and family, the reason I must paint solvent- and toxin-free.