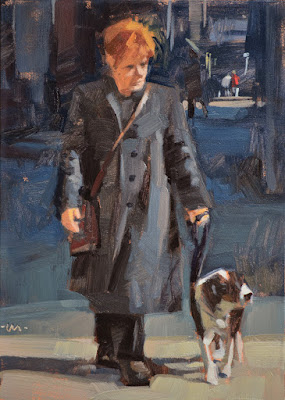 I am back from the plein air convention and inspired to paint! I saw a number of fantastic demos and talks, hung with some old friends, and met some new ones. I also bought a few new products to try out (more on that later).

One of the talks was by a great artist named Brian Mark Taylor, about learning. He said "performing is not practicing," which really hit a nerve with me. Brian spends two hours a day mindfully practicing one thing or another, spending about a month or two on each thing. So I compiled a list of things I'D like to practice, and promised myself I would spend time each day working on that. So far so good.
Posted by Carol Marine at 8:50 PM

Hi Carol: Would you be willing to share what things you are going to practice? Brian Mark Taylor is an amazing artist, so if that works for him, it is certainly worth considering. I think we tend to get so caught up with making artwork to sell, that we seldom allow ourselves the luxury of play. I'd love to hear more of your experience with the PAC! And I think your figure paintings are really hitting it out of the park these days :)
Cheers
Sharon

Structured explorations -- what are great idea! Do you have any starting suggestions for those of us who are less accomplished/less experienced?

Love this painting Carol! Actually, love ALL your paintings. Curious about "performing" vs "practicing" and hoping you will elaborate in future posts

Great advice. It sounds like something I'm kinda doing but seeing the words in print "Brian spends two hours a day mindfully practicing one thing or another, spending about a month or two on each thing" solidifies my practice.

Walking the Dog is brilliant. I love it!!!

I would be happy to share the list of practice ideas I wrote down for myself. All involve dividing panels into smaller shapes and doing one after another to try out each topic in a variety of ways:

Joni, in my classes I have students start with apples. They divide their panels and paint one apple in each one, taking only 10 minutes to do so. I see TONS of improvement during this, and highly recommend it for anyone. I do it myself on occasion and always get something out of it. : )

This was maybe the best thing about art school:practice.