Give Us a Drink 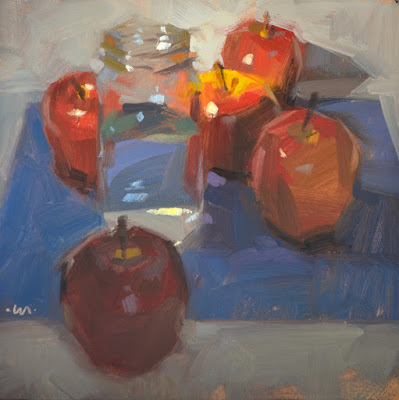 Click Here to Bid (6x6in. - OIL - starts at $100)
This is my last painting in the subconscious "surrounded" series. Meanwhile, even though this painting is in oil, I'd like to now post about my gouache supplies, because I'm getting lots of questions about it.

I started out with a cheap set of gouache paint - Caran d'Ache. If you want to just try out gouache, this might be your ticket. The paint is ok, and relatively inexpensive. After I realized I was hooked, I asked around and everyone recommended either Holbein or Winsor & Newton, so I started buying individual tubes. After trying them both, my first impression is that Holbein is fantastic! It's like painting with butter. I bought a tube of Cerulean (W&N) that came completely separated. They sent me a replacement and it is only slightly better. Now I'm looking for another "cool" blue. Until then I'm using my original Caran d'Ache Cyan because it's better than anything I've gotten yet. Holbein doesn't sell big tubes of white, so I got the W&N permanent white, which I like a lot. I tried their Zinc white too and don't like it as much. You can see in the pictures (click to enlarge) what I'm using, for now. I've ordered more colors to try. Eventually I'll probably settle on a palette - until then I'm having fun experimenting. I store all my paint in a ziplock bag when not in use. Oh, and I haven't tried the acrylic based gouache and don't know anything about it, sorry.
Mike Hernandez (a fabulous gouache painter!) recommends the Masterson Sta-wet palette, which is the thing to the left of the pencil & water sprayer. I use the "top," uhh, which, just to be confusing I put on the bottom of the picture, to put my little board in (that I paint ON), and the palette (with the yellow sponge thingy) above that, JUST to hold my paint (I don't mix on it). I took the photo at the end of the day, so my paint piles are mostly used up. I keep the sponge wet all the time with DISTILLED water, and close it up (and put it inside a ziplock bag) when I'm not using it. Eventually I'll have to change out the sponge I think, so I ordered extras. To do the actual mixing, I use the thing you see under the brushes. It's a palette for watercolor, and when (at the beginning) I put the paint in the little wells of it, they dried almost instantly, which is why I switched to the sponge thingy. Mike Hernandez recommends a butcher tray for mixing. I'll try that soon.
The brushes I'm using at the moment are some that I already had on hand and seem to work fine. In case you can't see them, they are Dynasty flats, sizes 1/2 and 3/4 inch. I also have a little ... round I guess? I don't even know when or where I got it. Looks like it's an Artist's Loft size 0. I use it for little details ... when I choose to add them, which isn't often.
I am painting on Crescent, hot press, illustration board, 24-ply. I've also used 16-ply. Both are thick enough not to warp, so no taping is required. They come in big sheets that you've got to cut up. All you need is a cutting mat, a ruler, and an exacto knife. It's easy. Hot press is smooth, so if you like more texture get cold press.
If you've read this far - yay! You must be keen. So let me just end with - gouache is super fun!!! I'm still working on my list of reasons why I love gouache specifically. But let me just say - try it! Especially if you haven't already. Or if you're bored with whatever you're doing otherwise. : ) Happy painting!
Posted by Carol Marine at 5:23 PM

Email ThisBlogThis!Share to TwitterShare to FacebookShare to Pinterest
Labels: paper

Hey Carol! Thank you for sharing this information. You have inspired me to give it ago as I am going to be going on vacation soon and it looks to transport easier than oils. Gouache would be a fun new thing.

I do have a couple of questions though, since gouache is a water based medium, does the paint not revive itself from being dry when you spray it with water (in reference to paint on pallet, not on paper)? And with the masterson Sta-wet palette, don't you put the paint on top of wet paper over the sponge? - Tim


After this one in Italy, I will no longer be teaching workshops, sorry : (

Carol's Panel Holder
A unique holder of panels, designed by David Marine - holds the panel still and allows you to paint off every edge with nothing in the way.