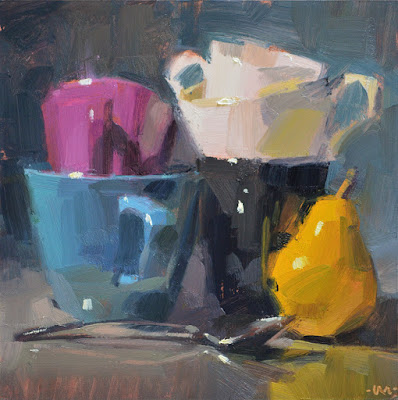 In order to test out my new palette (specifically the black portion), I needed to paint something really dark. And I will say, it was MUCH easier, especially that black cup! If you notice, part of it is in light, and part is in shadow (and parts have reflected light). To mix those piles and get those subtly different values & colors "right," is hard! But mixing them all on top of black made it much easier, because I was comparing them to a value that was much closer to what it needed to be (closer than white).

Which brings me to a discussion about palette color in general. I started out with a white palette in college. Years later someone suggested a gray palette was "better," so I tried it for about a month. And it completely threw me for a loop! Because I was so used to mixing on white.

But some people love a gray palette (or natural wood). And I like white - and now with a black portion! So I've come to the conclusion that it is completely a personal preference!! There is no better or best. Figure out what works for you, and screw everybody else's opinion. : )
Posted by Carol Marine at 4:38 PM