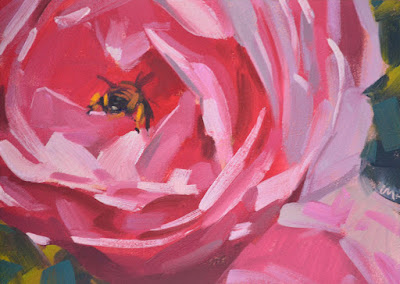 One more rose (with a surprise inside!) and then some landscapes are next. I've been doing more plein air lately than usual - partly because the weather here has been so nice, and partly because I've just really gotten into it lately.

On Tuesday my family is headed out for a 3 week camping adventure! Part of this (for me) will include plein air painting (and photographing). Up until this morning our plan was to head for the Olympic Peninsula, but we just found out that dogs are only allowed on 2 of the trails! So, after much discussion, we've decided to head East instead, into Eastern Oregon. There is much to explore! Anyway, an important part about this is that I won't be able to ship until we get home, which will be July 7th at the latest. I will post as often as I can and have paintings for.
Posted by Carol Marine at 9:36 PM

We fell in love with Bend when we cam through in April on our way home from southern Oregon. What a great state, every city had something really unique to offer. PS Thanks for the great breakfast tip!

Love the title and the painting. Have a wonderful trip.

Hah, love the bee butt. Gorgeous rose, too :) Have a wonderful trip!